Everybody has a weakness. First there was Achilles and his heel. Then came Superman and kryptonite. Now it's Monique and popcorn balls. Who knew?? 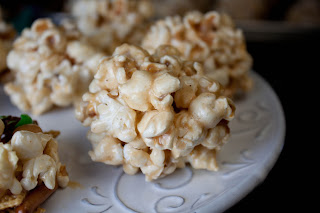 A few weeks ago I asked Facebook fans what type of childhood snack they would like to see recreated. There were some great answers (many of the Fat and Happy viewers had impressive childhoods!) but the one that caught my eye was a boozy popcorn ball. At that moment I knew this would be my Halloween post.

Popcorn ball recipes are abundant but there's no real secret to them, just caramel and popcorn. I have an absolutely foolproof soft caramel that I use for drippy caramel needs. And I've created one for Chocolate Bacon Caramel Popcorn; it is the sticky ball portion that eludes me.

My first pumpkin batch curdled and was too wet to stick together. It was tasty though so I figured I was on to something. The next rum batch seized up - essentially 1/2 cup of rum makes the caramel too drunk to spread among all the popcorn. Between candy thermometers, hard and soft ball stage, and handling hot molten lava... it's complicated.

Here's where it gets simple - a classic marshmallow mixture fills in for the troublesome caramel sauce. Turns out marshmallows are liquor friendly...and rather sticky to boot!

The result is one gooey pumpkin flavor popcorn ball and one faint-rum undertone sticky snack mix. Either would be great for your Halloween party, just serve them with napkins.

The moral of this story is that with a few fat and happy modifications, you can ultimately get around your weakness. Or the moral might be that booze doesn't actually go with everything, but I'm not ready to admit that yet.

Fat and Happy Food Blog Tips and Techniques: Placing the popcorn balls in the fridge for a bit helps them to set up better, unless you want that gooey rice-krispie-kinda-of-effect (it's a good thing!) 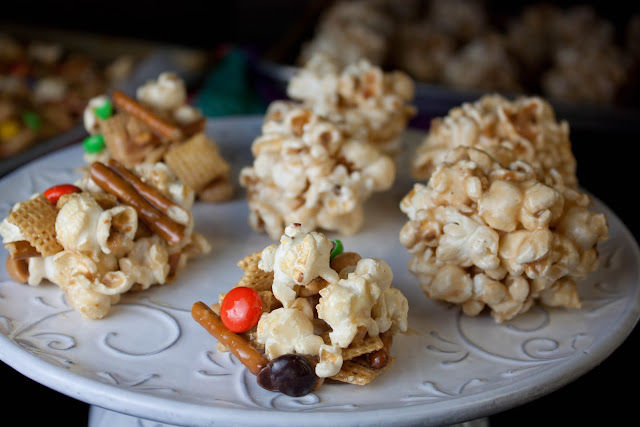 Pop the corn: heat the oil over medium-high heat with 3 kernels of corn in a covered pan. When the first kernel pops, add in the remaining kernels, shake and cover. When the kernels begin to pop, prop open the cover to allow steam to escape, shake well. Remove from heat when there is 3-4 seconds between pops. Have popcorn in a large bowl ready to mix with the marshmallow mixture as well a sheet pan either buttered or covered with parchment paper.

Make the boozy pumpkin marshmallow goo: Place the butter, brown sugar and marshmallows in a pan over low heat. Melt to combine, stirring often with a heat proof rubber spatula. Add in the Pumpkin Liquor and the cinnamon, stir well.

Carefully pour the mixture over the popcorn and fold until the popcorn is coated. Butter your hands and begin to form balls. If the mixture is sticking to your hands, run them under cold water, shake off the water and them form the balls and set them on the sheet pan. Let the balls dry for a while; eat within a day or two.
Yield: about 20 small popcorn balls 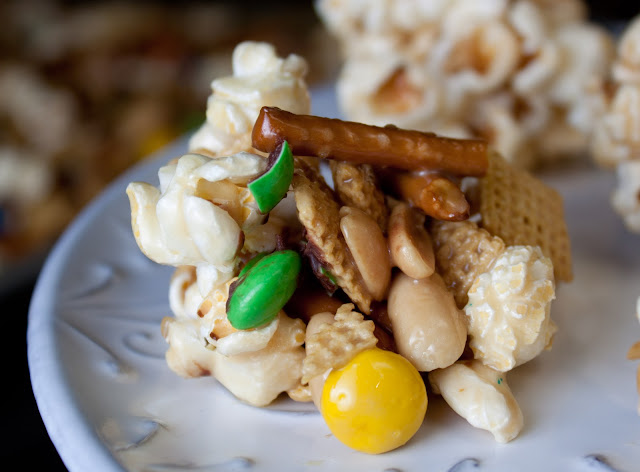 In a large bowl, toss together the Chex, pretzels, M&M's, peanuts and popcorn.

Make the rum marshmallow goo: Place the butter, brown sugar and marshmallows in a pan over low heat. Melt to combine, stirring often with a heat proof rubber spatula. Remove from heat. Slowly stir in the rum, stir well.

Carefully pour the goo over the popcorn mixture and fold until the everything is coated. Butter your hands and begin to form balls. If the mixture is sticking to your hands, run them under cold water, shake off the water and them form the balls and set them on the sheet pan.

Here is my disclaimer on these- forming these into balls proved rather tricky. I found it best to actually for a ball is to spoon a pile into the parchment paper and try to guide it together. Think of this as a gooey snack mix over a formed ball. Best eaten within a day or two.