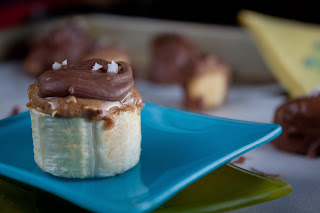 Eating healthy deserves a treat beyond an organic carrot. And it doesn't mean creamy, yummy desserts and snacks have to go by the way side.

This isn't necessarily new, but still worth a second look. A simple banana slice topped with nut butter and a little dollop of chocolate. If you are feeling really sassy, try topping with a little salt or cocoa nibs.

Eating these right away offers a decadent, creamy and satisfying bite. Store in the freezer if you enjoy frozen bananas.

Treat yourself to something healthy with these Fat and Happy Peanut Butter, Chocolate, Banana Bites.


Recently I've found that singeling cashews out of the nut mixture can is not the only way to enjoy them. It's true. Raw cashes are now synonymous with sweet, fluffy dessert toppings as well as savory creams. 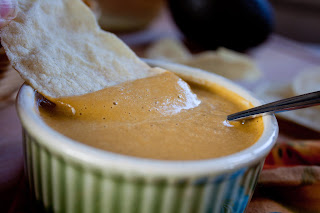 You may also be asking why? The simple fact is that not everyone eats, or can tolerate, dairy. And why live a life of creamless soups and desserts when you don't have to?

You may also be intrigued by this, but have concerns with how daunting the process is going to be. Turns out, the process is really quite simple. I'll admit, I was initially hesitant and it took a bit before I finally soaked my first cashew. But I haven't looked back since. Soaking cashews involve covering them with water overnight and then rinsing them before blending with water. That's it! Vary the texture through amounts of water and length of blending. Add a bit of sweetener and vanilla for dessert or leave plain to use in place of classic milk and cream.

Below I've given you the makings for two base soups: a Creamy Avocado Soup and a Creamy Pepper Soup. You can also combine them to make a Creamy Avocado Pepper Soup. Also listed are numerous additions that can be added to either, ultimately giving you ability to make hundreds of soups. Perhaps they should be called Creamy Transformer Soups?

Bite the bullet and test out the cashew phenomenon with either of these ultra simple, Fat and Happy Cashew Cream Soups. It will be the beginning of a new relationship. 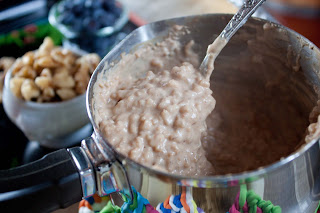 Flavor packed smoothies have been my breakfast of choice recently, but there are days when good old fashion stick to your ribs oatmeal is a must.

I'm also a fan of simple tea, but I still turn to a chai tea latte when I'm looking for something warmer and filling. Being dairy free doesn't mean giving up the latte, it just means it's time to get creative.

And getting really creative means building layers of unexpected flavor. Steeping almond milk with chai tea and cooking it in oatmeal is the quintessential warm, hearty, mind-blowingly healthy breakfast and it couldn't be easier.

Fat and happy is turning healthier, but not flavorless. 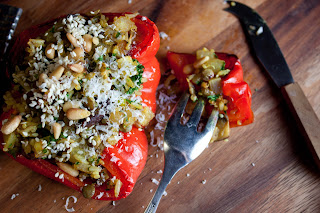 Last week I posted this Warm Squash and Kale Superfood Salad recipe that involved making a brown rice, quinoa, lentil mix; I use this mix as a base to a lot of recipes. The amount left over from that salad recipe will leave you with extra mix to work with; this recipe is great way to use up that left over grain mixture. Of course, you can make a new batch or just use one grain instead of all three; it's versatile so do what works best for you.

What's different about this recipe from other stuffed peppers is adding grapes just before baking them. Roasted grapes turn slightly sweetened, like a raisin, without being hard and dry. It's a burst of unexpected flavor. Make the stuffing ahead of time, and then just stuff and bake when ready.

Left overs are not a problem when you get creative and these Mushroom and Grape Stuffed Peppers are healthy and delicious.


I can't get enough of this salad; I've made a variation of it for three different gatherings in the last week and the reviews are glowing. 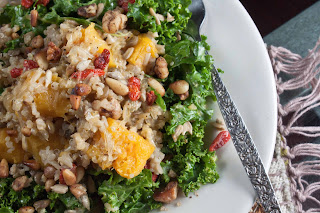 Warm comfort foods are a must of you live in a cold climate, but often those foods are covered in artery clogging, fat-laden meats, creams and cheeses. And they can be so overcooked that they leave you feeling full and lifeless.

Finding myself in the midst of a detox during the above noted gatherings and one them them landing on Meatless Mondays lead me on a quest to create a healthy comfort dish that was warm, filling and tantalizing to the taste buds.

The warmth of the squash and quinoa slightly soften the kale while the lemon goji berry dressing keeps the whole salad lively and fresh. And the salad is so versatile you can add and subtract other veggies based on your seasonal veggies and what you have on hand.