Lentils are a fabulous little bean that cooks quickly and is loaded with nutritional value. Fiber is a given with any bean, but lentils also help lower cholesterol and are a great source of vitamins, minerals and protein while being low in fat. 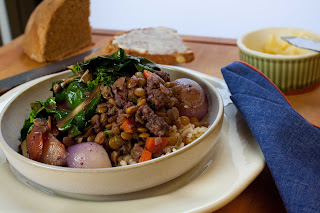 So if this little power packed legume is so amazing, why isn't everyone huddling over the lentil pot stewing in the kitchen?

Enter red wine here. It's no secret that I tend to have an open bottle of wine on my counter at all times. Usually the bottle is emptied into my belly via a glass. However, on occasion, there has been the odd encounter with bottle that doesn't get drained. 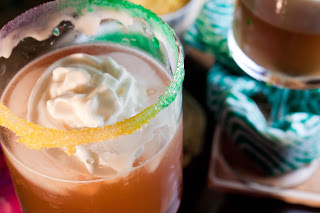 Name the first thing that comes to mind when you hear the words 'Mardi Gras'.
Beads?
Boobs?
Parades?
Drinking?
How about a King Cake? To many, this delectable dessert is the epitome of the yearly carnival celebration. In many countries a kings cake is associated with the Christmas holiday season. In the Southeastern region of the United States however, the king cake is available during the pre-Lenten celebrations of the Mardi Gras Carnival.

What does the King Cake taste like? Think warm gooey coffee cake meets cinnamon roll, pastry-like cake covered in sweet icing and topped off with green, purple and yellow colored sugar. The important question is why did I want to turn the king cake into drink? I can only answer "why not??"

Many variations of this drink were selflessly consumed and they all worked out fairly well. The winning combination won because on top of it being a drink,  it can also be served with a spoon to enjoy the foamy 'dessert' topping that forms after mixing in the whipped cream with the champagne.

Mardi Gras is upon us people! Gather your best beads, locate the nearest parade and get your drink on starting with this Fat and Happy King Cake Cocktail. 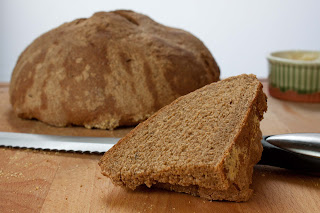 Somewhere in my warped mind I tell myself that I'm going to cut out carbs. Carbs! As in pasta, potatoes and bread. Honestly, like that's really going to happen. I say I'm going to cut down on carbs and I end up making 2 loaves of bread and a batch of ravioli.

I was actually going for a Russian Black Bread...it came out more of a brown bread. A delicious, delicious brown bread! The only thing missing was sweetened butter, but a little honey took care of that!

Read more plus get the recipe and tips>>
at 1:37 AM No comments:

I've lost all sense of the days. So when I saw an email reminder for the February Recipe Swap happening today I nearly fell out of bed. I was sure I had another week to play in the kitchen. Nope, turns out I had about 5 hours. ACK! 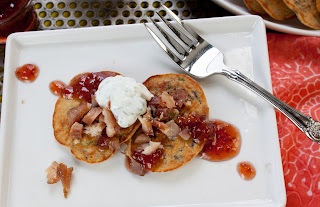 This swap was to remake a wild rice salad. I sat stunned for a moment holding my coffee cup exactly 1 inch a way from my lips. The intoxicating smell snapped me out of my trance. There is always wild rice in my pantry thanks to my Minnesota connections. Hundred of wild rice salad variations have made their way through my kitchen...but I was feeling this recipe needed to be more just a salad. Savory pancakes came to mind as a wave of long forgotten creativity waved over me; then a moment of remembrance brought the whole dish home.

Just a few weeks ago we were battling to reel in beautiful Dorado (Mahi Mahi) while deep sea fishing in Cabo San Lucas. We grilled our catch for our group as a celebratory dinner on our last night; luckily we had one of the largest catches smoked to bring home with us. This smoked Mahi Mahi is a perfect accompaniment to the wild rice.


My love for pozole has been rekindled thanks to a recent trip to the land of tequila and flip flops. It's not that I stopped liking it, but rather that I stopped coming across it. When we lived in Denver, Mexican restaurants where Grandma was hand making the tortillas in the back were on every corner. But in chi-town, the choice is often between a chain taco joint or a trendy new joint that puts more focus on the party than on the food. The good stuff is out there, you just have to know where to find it! 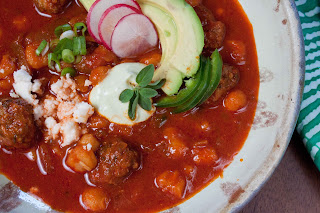 I had the opportunity to talk with the head chef of an elite resort as well as a native who cooks for Gringos daily. My variation of this recipe is an amalgamation of their versions, with my interpretations added for fun. Chorizo meatballs replace calf head, dried oregano gives way to fresh and crunchy radishes sub in for iceberg lettuce on the top. The broth has flavor but is not overwhelming as it's meant to be the background; once you add on all the toppings, it becomes a really great blend of flavors.

This recipe seems daunting at first look, and I'll admit - there are quite a few steps in the process and it does require a few pans. (Tip: I re-use the same pans and blender without rinsing, it really just adds more flavor!) The steps themselves are fairly simple.

Read more plus get the recipe and tips>>
at 1:54 AM No comments: