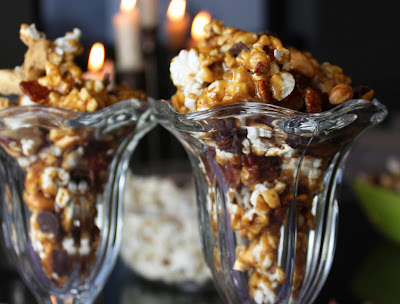 Everything tastes better with bacon. This is a sneak peek at my planned New Years Eve dinner dessert. I wondered if a chocolate covered bacon caramel popcorn was regal enough to serve for with an elegant dinner, then I wondered why the hell I was wondering that? Who wouldn't love it, and besides - who cares?

I learned something about popcorn today, it does not pop as well using bacon grease in place of oil. My thought was to impart a hint of 'animal fat' flavor in the popcorn, which it did but only half of the kernels would pop. Now we know.

Rather than cover all the bacon in chocolate, I decided the final recipe needed to include some caramelized bacon as well, it's quite a nice way to highlight the bacon through a range of flavors and textures.

There are no rules of what an elegant dinner is, so have fun with yours by serving this bacon popcorn, just do it in a pretty dessert dish. There's no reason this Fat and Happy recipe has to be limited to New Years Eve, either!

Tips and Techniques: The type of bacon you choose will make a difference, choose a quality smokey bacon.  If your bacon is not smoky, add in a few dashes of liquid smoke and black pepper to the bacon while it is cooking. 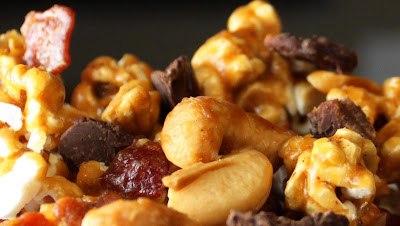 Pop the popcorn, see notes below. Cut each strip of bacon in half lengthwise and the dice it into small pieces.  Fry until crispy and drain on a paper towel. Set aside to cool.

Have a cookie sheet ready, and either grease the pan or line the pan with parchment paper. Bring the brown sugar, butter, salt and corn syrup to a boil. Don't stir after it reaches a boil, let boil for 2 - 3 minutes. Then add vanilla and baking soda and whisk together vigorously.  Add the cashew and 1/4 cup of bacon tot the caramel pot, stir. Quickly and carefully pour over the popcorn and toss. 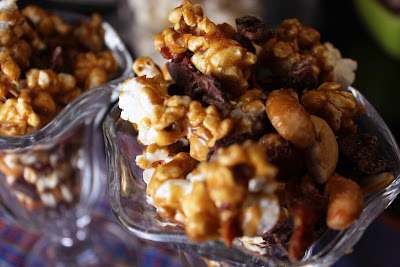 Bake at 250  degrees for roughly one hour. Take the pan out and carefully toss the popcorn every 15 minutes.  After one hour, take a few kernels out, let them cool and taste it to see if the caramel hardens to your liking.  Remove the pan and let the caramel corn cool.

While the caramel corn is in the oven, cover the bacon in chocolate.  Warm the chocolate until it is melted; toss the remaining bacon into the chocolate and stir. Pour onto a large piece of parchment paper and spread out the bacon as much as possible. Allow the chocolate to cool and harden, chop into smaller pieces if need be.

Toss the caramel corn with the chocolate covered bacon. Enjoy!

Popping Popcorn on the stove:

Pour the oil into a deep pan that has a lid, heat the oil over medium-high heat.  Drop a kernel or two into the oil to test the temperature, the oil is hot enough if the corn is sizzling. If the corn is placed into the oil too early, the kernels will soak up too much oil.

Add the popcorn into the pot, cover with the lid, shake every so often to keep the kernels from burning. When you start to hear the popping, shake the pot and crack the lid to help moisture escape.  (Some kernels may fly out of the pot, but this will keep the popcorn from getting soggy.)  Lift the pan above the heat and shake, return pot to the heat.  Continue until the popping stops and you don't hear kernels rattling on the bottom. Pour out of the pan and sprinkle with salt.
at 8:44 AM