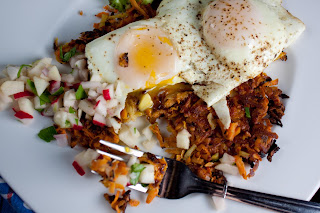 Hash never used to be on my favorite list thanks to a college friend who ate hash out of a can. It was dog food with a better label. Actually, I'm not even sure the label was that great either.

Fast forward to a time when I realized hash doesn't have to be bad. Homemade hash is good. Downright fantastic, in fact, when made with fresh ingredients. This hash screams to be topped with a runny egg; there is no reason to say no.

Step away from canned food, you'll be fat and happy with tasty, fresh hash for breakfast, lunch or dinner.

Fat and Happy Food Blog Tips and Techniques: A key to getting crunchy, browned potatoes in your hash is to remove as much moisture from them before cooking. You will be wowed at how much liquid comes out of the potatoes when you squeeze them in a potato ricer. If you don't have a ricer, roll the potatoes in a dish towel and squeeze as hard as possible. 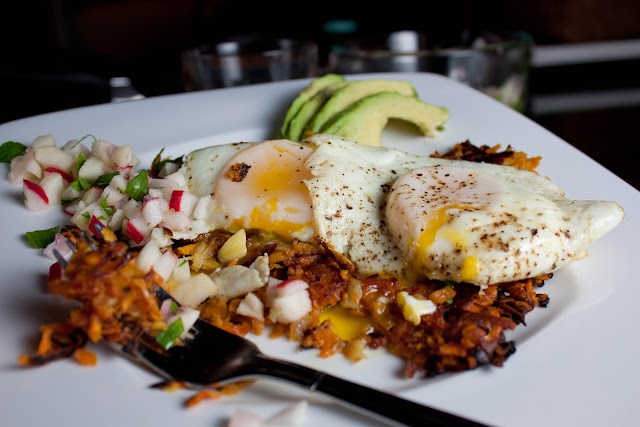 Grate the potatoes, carrots and onion. Squeeze out the moisture in the potato by using a potato ricer.

In a large saute pan over medium heat, drizzle enough canola oil to just coat the bottom of the pan. Toss together all the ingredients, add to the pan and cover. Let the hash cook until the bottom turns golden brown. Toss to brown on the other side. The potatoes and carrots should be fairly softened at the mid turning point, if it feels like the hash is browning too fast, turn the heat down to medium low.

Make the apple salsa while the hash is cooking. Peel and core the apple. Cut the apple and radishes into small cubes. Toss with the parsley and lemon, set aside.

Cook the 4 eggs as desired.

To serve: place the hash onto a plate, top with the apple salsa and 2 eggs per plate. Add a wedge of avocado if desired. Makes two large plates of caraway hash.