Shopping at a club store like Costco takes patience;  patience and the know-how to operate an over sized cart in-between slow walkers, around kids that dart out unexpectedly from a row of hanging sweat pants and the need to perform an occasional 360 degree loop-de-loop to avoid the free sample tables ... no matter how hungry you are.  It's quite similar to firearms training that policeman go through where a cardboard image of an old lady pops up at the same time as a gang member poster that is aiming an AK-47 at your head and you need to decided who to take out ... from what I've seen on tv, anyway. 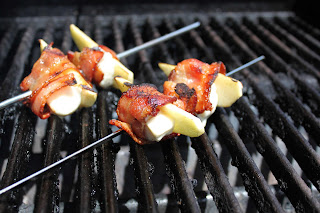 I visit Costco about once or twice a year and it completely cracks me up; I often wonder if this is what the French envision when they think of Americans.  Don't get me wrong, it's a great place to save on 100 rolls of toilet paper in one pop; we just don't have the room to store 99 extra rolls. It's also eerily similar to the visiting the DMV.

Costo does make a very nice garlic bread and I've picked up some amazing deals on Quinoa, stuffed pickled peppers and canned tomatoes.  On my last visit I grabbed a great dual mozzarella deal only to realize later my eyes were bigger than any of my recipes. What to do with all the extra cheese overtook my mind for a few hours; so many options but I also wasn't up for a trip to the grocery store. 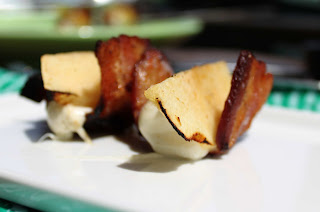 The bacon became an obvious choice to pair with cheese and the grill.  But I felt it lacked a little something, a little crunchy, a hit of flavor without overwhelming. Enter the apple and the appetizer is complete.  Choose a green apple for sourness or a typical Red Delicious for a milder option.

You don't have to brave Costco to make this simple fat and happy appetizer, but if you're looking for a little challenge, it might be just the adventure course you've been looking for.

Tips and Techniques:  Do pre-cook the bacon and do chill the cheese to avoid a droopy, sticky, melty mess on the grill. I also think it could be fun to have a little drizzle of apricot jam on these but it's totally optional and not needed. 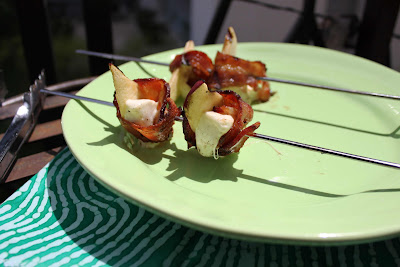 Cube the mozzarella cheese, place in the freezer while you pre-cook the bacon.  Cut 4 strips of bacon in half and begin to cook on the stove.  Continue to cook the bacon strips until they nearly begin to brown on both sides, remove from heat and cool.

Slice the apple and squeeze lemon on the apple slices to keep them from turning brown. 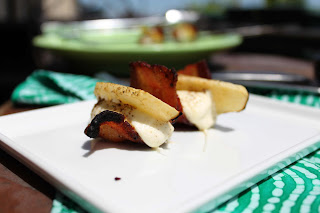 Wrap 1/2 piece of  bacon around one cheese cube and one apple slice, carefully thread on a skewer, add fresh ground black pepper.  You can make this recipe ahead of time through these steps.  Place the skewers in the fridge or freezer (don't freeze for more than one hour) until ready to grill.

Place the skewers on the grill over medium high heat, grill until the bacon crisps and just before the cheese melts down into the fire, about 5 minutes.  Keep an eye on them, once the cheese softens it will melt into the fire quickly.  Serve immediately.
at 4:11 AM