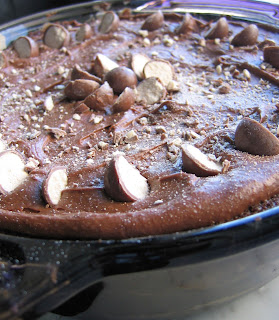 Did you ever watch that Seinfeld episode where George says something really funny in a meeting- and realizes that he'll never be able to follow it up- so he announces "I'm out!" and leaves the meeting on a high note?

This cake is my George-moment! Swear to God I may never make anything as amazing as this ever again! Ever! In fact, Dave is questioning my ability to actually re-make this cake (although I'm pretty sure he's just saying that just to get me to make it again!) I did create this for Dave's birthday since he is such a Whopper fan! I'm telling you this cake is like eating a giant, moist, chewy malted milk ball. It's unbelievable.

In a rare Monique experience- I actually tried to keep meticulous notes...well, notes anyway. Perhaps not meticulous. While in the midst of creating this, no one would have never thought this cake was going to work out.

Before you jump into making this cake- I feel the need to forewarn that there are some steps involved, it's a bit of a process. And the cake is not going to look or bake like a normal cake, at all! It may look like its going to rise, but it falls, and you can't rely on the toothpick to be clean, it's too fudge-y to come out clean. Another really important piece is that you have to use real malt powder! And you can't get that stuff at normal stores. I went to a malt shop (Ed Debevic's) and talked them into selling me some. Do not attempt this with say- carnation powder, it is not the same.

But the rewards of this cake soooo far outweigh the risks. The fudge-like cake and the frosting turn the meringue into gooey, chewy center that is so hard to even describe. You will be a God, on a pedestal if you can pull off this cake! Seriously! Amazing!

3 egg whites, whip on medium until soft peaks form.
slowly add
1/4 cup sugar
1 tsp vanilla
Add 1/2 cup of malt powder
continue to whip until the whites are shiny with stiff peaks
(don't worry if the white fall, they will still work. Trust me!)

Spread the whites on the parchment paper. I made several smaller meringues rather than one large one.

Bake for about 2 hours. You can start them at night and shut the oven off and leave them till morning. 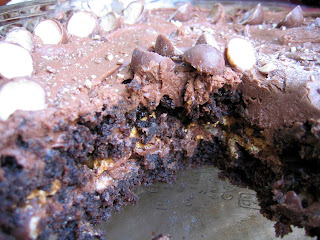 Now combine the wet and dry in the mixer, blend slightly, and then add:

Pour this into 2 round greased cake pans (the batter will be somewhat thin)
Bake at 350 degrees. Now, you need this to just set up- when you stick the toothpick in- it's going to still come out with fudge on it. When I first baked this, I did this in one cake round -and it worked but also dripped over the edge and onto the oven. So I suggest using 2 basic 9" round cake pans. So for my one- I took me over an 1 hr to bake this. So I would try for around 35-45 minutes for two. Cool.

Make the frosting while the cake is baking

Now add the final malt powder:
½ cup malt powder
-don't beat too much. This last addition should actually stay somewhat grainy in the frosting - which helps give the grainy feel similar to a whopper!

Putting it all together
Place one layer of the malt cake in a deep dish casserole-like dish. You might have to push the edged in some, remember its a gooey cake so it's forgiving.

I kept this in the fridge and it lasted for over a week.
at 6:48 PM