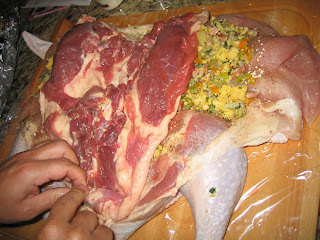 Yes, there is and this morning we watched the sunrise as we stuffed the turducken. We were right on schedule....until I accidentally melted the butter. Now we have to wait the for the butter to cool and harden (its goes under the skin). So the saga continues!

Stay tuned for the rest of the story and more photos (and recipes) - we are going back to bed!


Back up after the nap, I didn't really fall back asleep, I kept having visions of the oven on fire from all the fat! As you see I posted photos, this is one meaty breasted beast! It was actually fun, but I do suggest having a strong man on had to help push it all together. It was like when you pack 20lbs of cloths in a 10lb bag and you're taking turns sitting on the suitcase. Or, like when you have to lay on the bed while your friend tries to zip up your pants! (can you guess whose analogy was whose??!)

The process: lay down the deboned turkey- notice we left the wings and thighs in place. Season and now layer on your stuffing (for the turkey, I made the cornbread -andouille sausage stuffing). Take your duck and lay it out on top of the turkey and stuffing, season and add stuffing (I made the apple cherry for the duck). Now do the same with the chicken (here I made the mushroom spinich stuffing.)

That's the easy part! Now, have 3 metal skewers and and the kitchen string ready. Take the edges of the chicken breast, pull them together and skewer through them like you were trying to sew it up. Got that? It starts getting harder. Now do the same with the duck. and then the ...ha 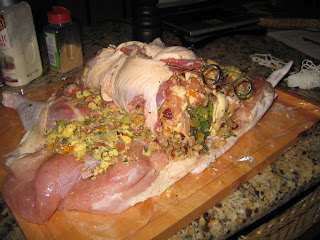 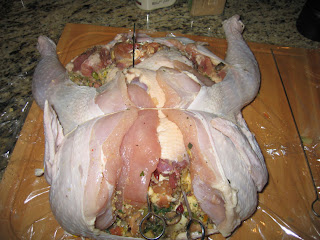 is were the muscle comes in! Look at the photo above- that thing is not coming together. Use your forearms, start with some string and keep working it. You're gonna get real close with your turkey.

Once that's done, now just tie it all up- season the outside, add butter under the skin if you can (this proved i 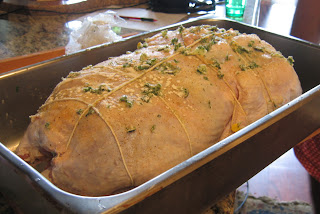 mpossible) and drop it in a pan and then the oven.

Wash every counter and utensil in the kitchen. 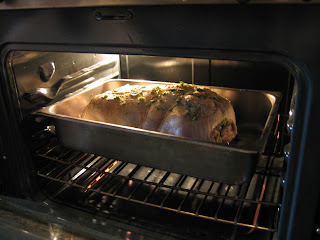