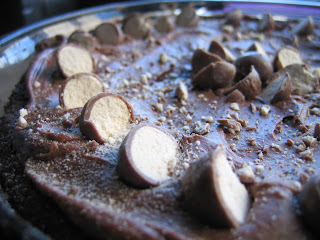 I was on the beach playing volleyball- so it had to be summer still- maybe August? Aaron and Alina called: "we are coming for Thanksgiving, and two words for you - Turducken!" It's  technically only one word, but I saw no point in correcting them because I was too busy responding: "O.K., sure."
Nope, I have not attempted this before.

As a a Project Manager and serious foodie/previous restaurant owner- this does not scare me in the least. I also realize going into this that there are bound to be some problems. If a PM ever tells you that they expect a project to be simple and follow the project plan; or if they tell you they had an engagement actually followe a plan- cry bullshit! They are a bold faced liar. What makes a good PM is being able to roll with the changes in a schedule; to be nimble in the face of adversity.

The week before T-day, I made a project schedule and started creating a few recipes in my head. It's Dave's birthday the day before on top of the Holiday, so add a cake to the schedule. Aaron and Alina will be arriving mid-day on Thursday so work in an airport trip and according the schedule, the turducken will be nicely roasted by 5pm, about 2 hours after arriving back from the airport. 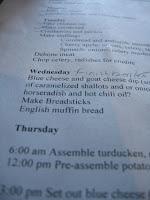 Shopping trip planned for Sunday got pushed to Monday- apparently everyone in Chicago decided to shop on Monday (bastards!). First stop Stanley's - cheap produce that only lasts about two days (cheap does not equate with quality, nor did cheap seem to hold true for the Holiday week pricing!!!) No parsnips. Damn- I'll pick them up at Dominicks.

We make our way to Dominicks, it's cold, we're both starving and it's now sleeting! For the first time I've ever seen at this store there are samples, cracker and cheese samples! Dave and cleaned the poor taster women out of everything; she didn't find us very funny either. Get the shopping done - but, crap, there's no parsnips and they are out of cream! What the hell- now add a third shopping trip to the project plan.

Project plan says make Cranberry Swirled Black Pepper Ice Cream, the marbled chocolate sheets and the cranberry praline garnish. Start this at 9:00 pm... by 9:30pm I've got cream sloshed all over the floor, already burnt a pan of pecans and cut my remaining 'good' hand (it's my left, how good can it really be?) Dave makes me drink, he's a helper monkey! Put the ice cream custard in the fridge along with the cranberry swirl- It's midnight and I give up- I'll finish the rest tomorrow. 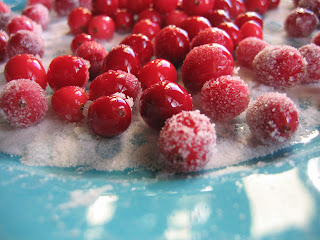 Tuesday- lots of early meetings, can only hit the snooze 5 or 6 times this morning rather than they 10 we usually do. Defrost birds, make cornbread (crap, forgot to buy corn!), finish praline and ice cream, premake stuffings and debone birds- the birds that are completely still frozen. New plan, put the birds in cold water, start on the birthday cake. I've decided to make Dave a Malted Milk Ball cake so I need to make a layer of meringue. Shoot- who used the last of the sugar? (clearly this was me, but I stand in the middle of the kitchen asking this question out loud as if by magic new sugar would appear.) Add a fourth shopping trip to the project plan. Okay, I'm a Project Manager I remind myself, I can do this.

Remake the praline, start the sugared cranberries and get the cornbread in the oven (substituted peas for corn- there similar enough aren't they?) add chopped jalepenos and touch finger to eye. Damn! Now run to the store, stop by Binny's Liquor, and back home by 8pm.

Load up the fridge and then realize I forgot to leave room for the turkey, duck and chicken, which were all in the sink defrosting. Dave makes me a drink.

Tackle the meringue first...add the malt powder I talked Ed Debevics Restaurant into giving me ....and whamo- watch the meringues fall. Blast! Ever wonder who you pissed off in a past life?

Grated my pinkie finger while trying to maneuver an orange with a cast on - finally give up for the night. Push everything on the schedule to Wednesday. 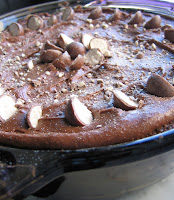 The malted cake sunk. Smash it into glass dish...volia! It's a deep dish malted milk ball cake.
Where's Dave with my drink?

Here's a few photos- I've gotta get back to kitchen because right now I only have the cake and the sugared cranberries complete. My arm hurts.
Oy vay!

Back at it, I chop all the veggies needed for the three stuffings for the turducken. Chat with Dave on IM- he'll be home in a few hours; we are supposed to go out for his birthday so I've got to finish everything by the time he gets here. I can do this.........why isn't the sink draining? The garbage disposal seems to work- but why is there standing water in the sink??? Call building maintenance- can't fix it; gotta call the plumbers. By the time they get here it will be 5:00 pm the night before Thanksgiving- that can only mean one thing- Holiday pricing!! Call Dave, he's not amused. I really hope that cake I made is the best cake he's ever tasted...

Fast forward 6 hours- the sink is fixed, the birds are deboned, and it really was the best cake I've ever made Dave, thankfully since we didn't make it out for his birthday! But he 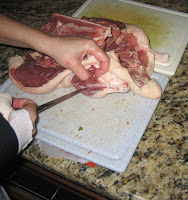 was excited with his cake and present (soon he'll be sporting a utilitkilt!) Somehow, things always always work out in the end. I may be skipping out on making the bread sticks, but I did manage to make two dips and get the crudite cut. The birds are deboned, Da 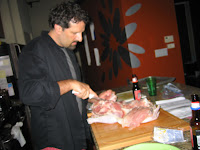 ve did the turkey and I did the duck and chicken. Now all we need to do is get up at at 6am, finalize the stuffings, stuff the three birds, sew it up and get it in the oven... how hard can that be?

It sounds like this all has been a disaster, and while it has not gone as planned, the measure of any good cook/Project Manager is adaptation- not sure I can adapt any more than I already have!!!! But I wouldn't change any of it; it feels good, like the old days at at the restaurant. My feet hurt, my arm hurts and my back hurts... but there is some really great food in the fridge and I can't wait to serve it tomorrow and to see Aaron and Alina!