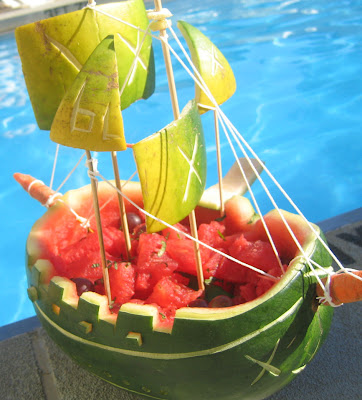 My good friend Lesley was having a very special birthday, and all she has wanted for this birthday was a Pirate-themed party. Heck, why not? We all love the Captain, or at least a handle of captain! And who said adults can't have theme parties anyway?

I needed to do something super fun for this party and was struggling with ideas of what pirates even eat? Besides gruel and scallywags. Not sure where this idea came from, but I decided to make a pirate ship out of a watermelon. Again, Dave thought I was a bit out of my mind.....talk about a theme...

I've done basic bowl and baskets out of watermelons before, all filled with fruits and mainly used as centerpieces. But a pirate ship? Even I was slightly worried I was getting in a little deep...


I rode my bike to the store, strapped the watermelon on the back of the little fold up and hoped for a smooth ride home. 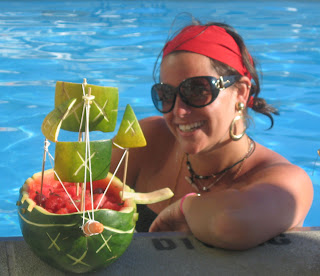 So you can judge for yourself regarding how it turned out - the photos do a pretty good job of showing the ship. All in

all, I think it came out pretty decent! There's sails, cannon ports and a plank! I named it the 'Black Lorch' - scribed it into the tail side of the ship and Lesley christened it by taking it into the water. 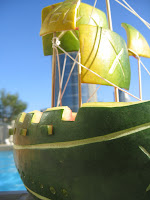 At some point the 'Black Lorch' was tested for float-ability. I guess they didn't notice that the port windows were all open, sending the ship to its near death. It was like watching Titanic all over again. Luckily a brave shipmate dove down and saved it- though the edible watermelon and grapes weren't so edible after that. One of the funnest party favor, decoration, gift ideas yet. This could be a super hit with a kids party too!

It's all trial and error- just know that the errors will probably show! But you'll quickly find that most of the fun just comes from the cutting, slicing and scribing and seeing faces light up in amazement - now that's being fat and happy!
at 9:08 AM