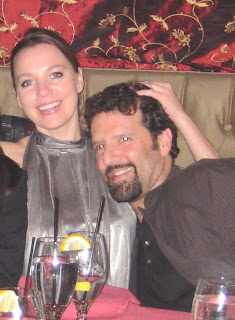 Do you remember when it became really popular to garnish drinks with random candy and other assortments? Let us pay tribute to the Bloody Mary because this was the first drink to sport food - a salad really in some cases. Celery, olives, salami, cheese or peppercini's, the more the merrier. But the movement I'm describing was the one that used candies and gummies , gum drops and gummie balls. One of the best examples of this that I've experienced was in Denver at a place called Double Daughters. Fabulous, dark circus-like atmosphere with railings made of axes and 8 foot tall booths.
Now enter La Pomme Rouge in Chicago. It's where hip beautiful people lounge, local celebrities are known to stay a spell and it features a less evil, less theatrical, yet extremely elegant with a circus-y/bayou feel. Expect a small but eclectic menu from alligator in a perfect slightly spicy cream sauce, luscious whipped lobster mashed potatoes and a decadent 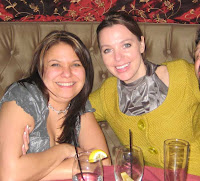 double espresso vodka martini with a little powder donut on the rim. Our great friend Raul ordered this drink and that little donut was fun to see, fun to talk about and fun to eat! Except he didn't eat the donut - I still don't get it. I'm not even a donut fan, but how could he just let it sit there on his glass the whole time and not eat it?? I eat the gummie bears and the gum drops, why not the donut? There is just something so fun and exciting when you get a little snack in your drink. These drinks are the cracker jacks of drinks - you get a fun little surprise in every package! Have you heard the expression "there's a pork chop in every beer?" This version would be "there is a dessert in every glass!" 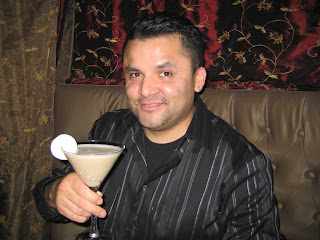 On a side note, the double espresso vodka was really something and I suggest ordering this straight up or over the rocks as your last drink before heading out dancing for a special kick!

As you can tell, La Pomme Rouge ranked high in my books. It's fun, hip, and tasty with very odd mix of drink offerings ranging from the classic Harvey Wallbanger and Tom Collins to a quite nice champagne selection to the silly appetizer-studded drinks. Strange drink menu but it somehow works for them. I look forward to going back soon and this time I'm ordering that powder donut drink myself. And when I do, that donut will be in my belly and I'll be fat and happy!
at 8:47 PM

Email ThisBlogThis!Share to TwitterShare to FacebookShare to Pinterest
Labels: Restaurants