There was an old Parisian chef who argued that an egg could only be properly prepared by cooking the yolk and the white separately and then bringing them back together to serve. 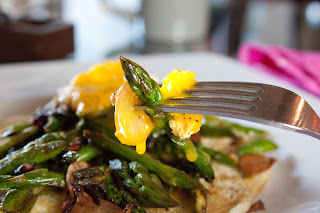 This idea ran through my head as I stared at a carton of eggs and a bunch of fresh asparagus wanting to concoct a breakfast with a twist.

Cooking the yolk and white separately seemed like it would ultimately just create a fairly basic fried egg. So I began to whip the egg white with a little spoon of mustard; then I poured that in a hot, buttered pan and cooked it until it was brown. After flipping my make-shift egg cake I added the yolk to the pan and let it all cook for a minute.

It was just the creative twist I was looking for. The whites do get an interesting texture similar to a super light frittata that I didn't love by itself; but it was a great back drop to the lemony asparagus with the runny yolk gooing all over it.

Maybe that old chef was really on to something with separating the egg. Or perhaps this is a sign that a little creativity can go a long Fat and Happy way.


Fat and Happy Food Blog Tips and Techniques: The yolk will cook fast, watch it closely to keep it from overcooking into a hard yolk. 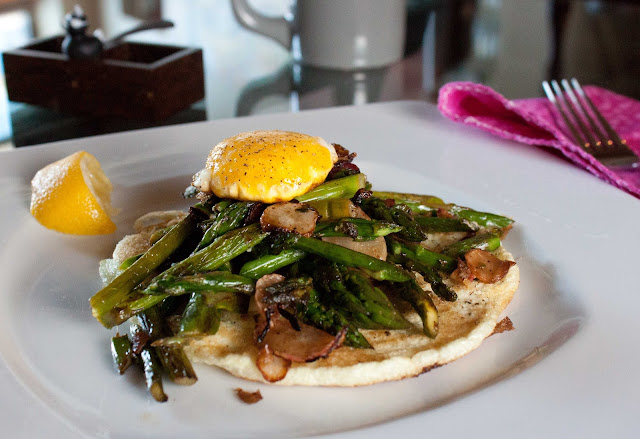 Clean the asparagus and chop into 2-3 inch pieces. Slice the radishes and a bit of  red onion. Toss them all into a hot pan with a drizzle of olive oil and cook until crisp tender, tossing often. Pour into a small bowl, sprinkle with salt, pepper and a squeeze of lemon set aside.

While the veggies are cooking, separate the white and the yolk. Whip the whites and the mustard with a wire whisk until fluffy. Once the veggies are done cooking and out of the pan, turn the heat to medium, add a pat of butter to the pan, allow it to melt and then pour in the whites. Smooth them out slightly to form a round circle. 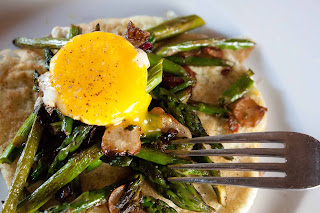 The egg white pancake will cook in about 2 minutes per side. Carefully add the yolk to the pan when you flip the whites. Cook about 2 minutes and quickly plate the food before the yolk overcooks.

Lay the egg white on a plate, top with the sauteed veggies and then carefully place the yolk on top. Finish the plate with a squeeze of lemon and dig in promptly.