Cravings are a funny thing - you don't know when they're going to hit or what they're going to be for. Normal cravings tend to run the gamut of chocolate to pickles and even beer; not too may people have French Toast cravings. 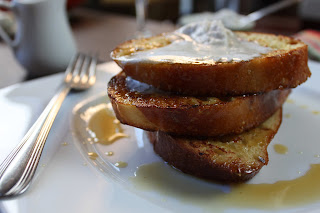 I do and did, however, and the craving lasted weeks. There was no escaping it, French Toast was going to get made and it needed to be good. Since I like to incorporate a little alcohol into everything baked and cooked or fried, this recipe ended up with a tequila edge.

The french toast itself does not make this dish, it's the combination of the french toast, the syrup and the cream that melds together and gives this breakfast treat it's amazing allure. It's sweet and savory with a little tiny spice finish.

Pair it with a classic mimosa or an orange margarita to keep the orange flavor going. And just because you're not craving it doesn't mean you shouldn't make it! Let the Fat and Happy brunch begin.

Fat and Happy Food Blog Tip and Techniques: This isn't the time to pull out your expensive tequila, use a mid -range and save the good stuff for sipping. 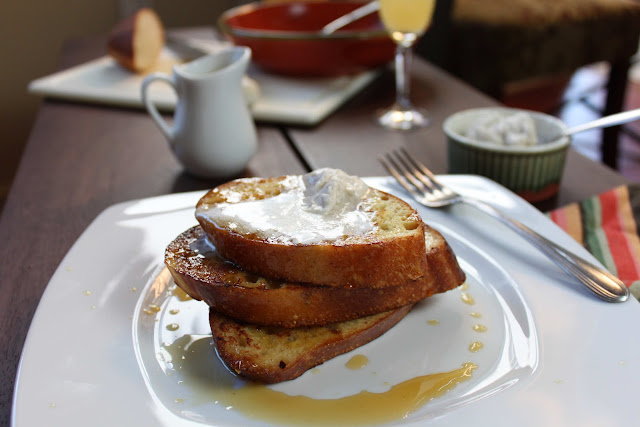 The syrup takes the longest to make, begin that first and let it simmer while you are making the toast. In a shallow bowl, mix the eggs, orange juice, tequila and allspice together with  fork. Slice the bread on an angle about 2 inches thick. Heat a flat fry pan over medium high heat, use the butter to grease the pan.
Lightly dip the bread into the egg mixture, don't let it soak too up too much mixture or become too wet. Cook on both sides until dark golden brown. While the french toast is cooking, whip up the spiced cream.
Stack a few pieces of the french toast in the middle of a plate. Give a good drizzle of the Orange Maple Syrup and top with the Spiced Whipped Cream. 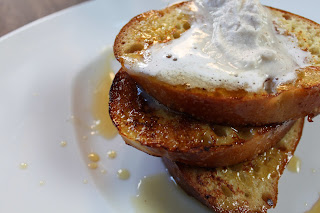 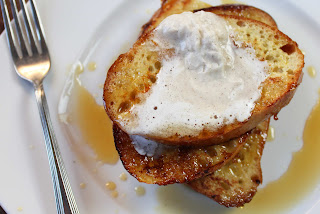 1/2 cup heavy whipping cream
2 Tbls sugar
1/8 tsp allspice
1/2 tsp vanilla
Whip all of the ingredients until soft peaks form. Spoon a small dollop on top of the Tequila Orange French Toast.
at 1:49 AM