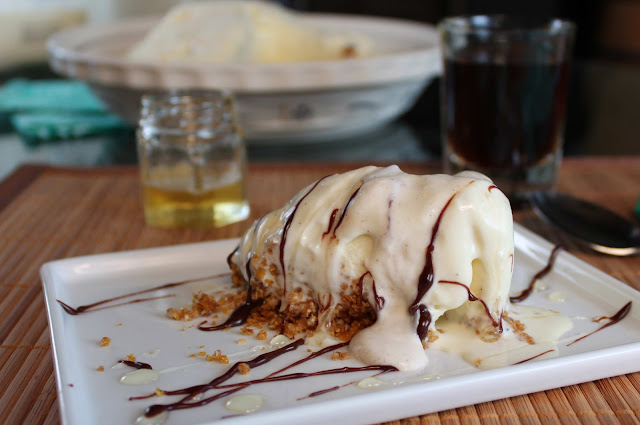 Is Mexican Fried Ice Cream really Mexican? If anything, it perhaps falls under the category of Tex-Mex, because let's admit you will never see this on the menu of your favorite taqueria. That said, it doesn't mean it isn't damn delicious!

My initial goal was not to make a pie version of Mexican fried ice cream; it started with a cinnamon ice cream which, on it's own, was a super yummy rendition of horchata. From there the pie just evolved. Perhaps because Dave was looking for a reason to put chocolate on top or perhaps because I have a tendency to take recipes to the next level.

Whatever the reason, let's just be thankful for it because the results are spoon after spoon- licking good. While taking photos of my food, often I'll take a bite of the food to change up the picture. Rarely do I have more than that, at least while in the photography phase. This pie however, I ate the entire piece before taking even one photo- holy yummy!

Whether this is Mexican, Tex-Mex or just plain old American doesn't matter, it's a Fat and Happy ice cream recipe that shouldn't be missed!

Tips and Techniques: The combination of the almonds with the cornflakes and brown sugar really sets the crust apart. The drizzle of warm honey and chocolate is an absolute must, do not miss this step.

Putting it all together:
Make the almond, cornflake pie crust and cool ahead of time (recipe below).

To serve, drizzle each piece with fresh cinnamon whipped cream, a tablespoon or two of warm honey and a tablespoon of warmed chocolate.  Enjoy! 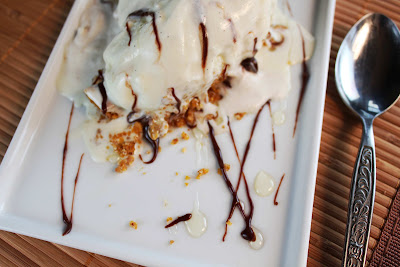 Begin to warm the cream and half and half over medium heat.  Whip the yolks with the sugar until fluffy, pale and doubled in size. Temper the eggs with the warm cream then add the eggs into the cream pot, stirring with a whisk.

Add the cloves, cardamom pods, cinnamon and vanilla to the cream. Cook over medium-high heat until the custard thickens and coats the back of the spoon, be sure to stir constantly with a wooden spoon. (Run your finger on the back of a spoon, you'll be able to draw a line through the custard and have it hold once it is thickened.)

Remove from heat and cool in an ice bath, stirring often.  Cover tightly and place in the refrigerator overnight or for 24 hours. This will allow the the the spices a chance to steep with the custard and will produce a creamier ice cream.

Strain into an ice cream maker and process according to manufacturers directions. Continue with the pie directions above.

Preheat the oven to 350 degrees. Place the almonds in a Cuisinart, pulse to a crumb. Add in the corn flakes, brown sugar and cinnamon, pulse again to a crumb. Slowly pour in the melted butter while pulsing.

Pour the crumb mixture into a pie pan and press into place. If the crumb crust is sticking to much to the your hands, used the back of a large spoon.

Place in the oven to toast until slightly browned, just about 10 minutes. Remove and cool.  Continue with the directions above.

Beat the whipped cream and the sugar until nearly stiff. Add in the cinnamon and finish beating until the cream reaches desired thickness.  For this dessert, my preference was to leave the whipped cream very soft, almost runny rather than as a stiffer version. Either way works great.
at 6:00 AM