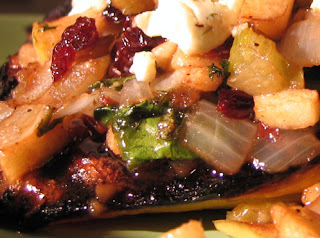 Two weeks ago I broke my arm, my right arm. It's taken until now to actually be able to move my fingers- and of course it's super hard not to use them now. So cooking is a bitch. I've attempted some basic stuff, but for the most part it's not really worth the pain it causes. My plan was to catch up on all the past recipes I haven't gotten around to posting.

Keep in mind that left handed typing is a real pain; but be glad you don't have to read my handwriting! So, over the next few weeks expect some real short blogs... and maybe that's a good thing! 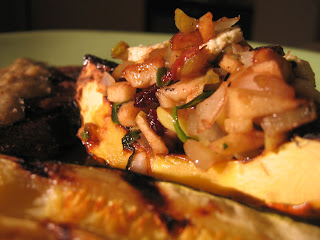 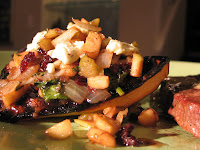 1 acorn or butternut squash
cut in half, scoop out seeds, rub with olive oil
place in 400 degree oven to roast until soft

When the squash is soft, stuff the cavities with the spinach mixture
Turn your oven on broil.
sprinkle the squash halves with pomegranic balsamic
top with goat cheese
broil until cheese is melty and bubbly.
at 12:37 PM