Contrary to popular belief, beer and ice cream do mix. Last year, The Bruery released their version of a pumpkin beer called Autumn Maple and I couldn't wait to cook with it. 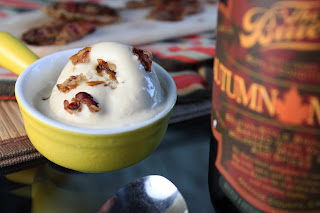 Rather than pumpkins, this beer is brewed with 17 pounds of yams along with spices and maple syrup. Consider it a bold sipping beer with a big nod to the booze. The warm fall flavors made me think of a holiday ice cream, a holiday beer ice cream. Genius.

Reducing the beer concentrated the spice while the maple syrup adds that remembrance of home. The crispy, candied pancetta adds a smoky, earthy layer along with a little crunch.

Because this beer has the full Autumn feel, I added a couple of coffee beans to help achieve that fantastic part of dinner where dessert-meets-after-dinner-drink-meets-coffee time. Enjoy Autumn through a bowl of creamy Fat and Happy ice cream.

Fat and Happy Food Blog Tips and Techniques:  Plan to make this ice cream the day before serving it so it can rest overnight before churning it. 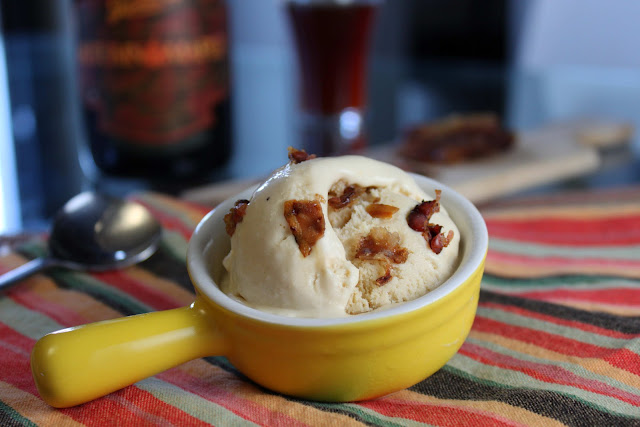 Pour the beer into small saucepan, simmer over medium low heat until reduced to about half. Cool and place in the refrigerator until ready to use.

Heat the whipping cream and half & half to just below boiling. While the cream is heating, whip the yolks with the sugar until the yolks are fluffy, pale and doubled in size. Temper the eggs with the warm cream by adding a few drizzles of cream to the whipped yolks, stir and add in a few more drizzles until most of the cream has been added.

Pour the yolk mixture into the cream pan and return to medium low heat. Add in the maple syrup and vanilla.  Cook slowly until the custard thickens, stirring often with a wooden spoon. Test the thickness by running your finger across the back of the spoon. If the line holds, it is ready.

Remove from heat and set in an ice bath until cooled. Add in the whole coffee beans, cover and let the custard steep in the refrigerator overnight.

The next day, stir the reduced beer into the custard. Strain the custard into an ice cream maker and process according to manufacturer directions. Make the pancetta while the ice cream is churning (directions below.)

Serve each bowl with a sprinkle of the brown sugared pancetta.


Sugared Pancetta
4 slices of very thinly sliced pancetta
2 tbls brown sugar
pinch of allspice
Heat a large sauce pan, lay the slices of pancetta onto the hot pan, cooking until crispy on one side. Flip the slices over and sprinkle each slice with a little of the brown sugar and a pinch of allspice. Allow the second side to crisp while the brown sugar melts onto the pancetta. Remove from the pan cool. Then crumble over the autumn maple ice cream.