There is nothing more intoxicating than the first summer barbecue with the familiar sounds of the sizzle when the meat hits the grill and the smoke smell lingering smell in your hair. 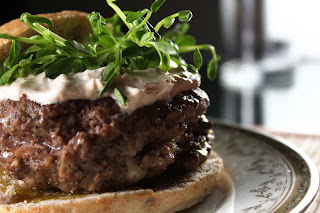 And yes, my grill has missed my touch as as well. Like the dutiful cleaning time after the occasional fire from my too-fatty bacon that wasn't secured well around the pork tenderloin - these are the bonding moments that make my boyfriend jealous.

Our first time back together couldn't be ordinary, it needed juicy burger love. The chorizo and habanero cheese stuffing flavors the beef and keep it so juicy it drips on the fire just enough to impart the simple seasoned burger with classic grill undertones. Creamy cumin and lime spiked sour cream soothes the tickling heat of the habanero while the pea shoots have the taste buds screaming fresh.

Welcome your grill back to the good life with a Fat and Happy Chorizo Stuffed Burger, it's yummy enough to satisfy you both.

Tips and techniques:  Mexican chorizo is moist and needs to be cooked; it mixes extremely well with eggs. Spanish chorizo is found dry-cured and  is ready to eat (think salami.) Don't be frightened by the habanero cheese, the burger will soak up some of the heat; or you could wimp out and substitute pepper jack. 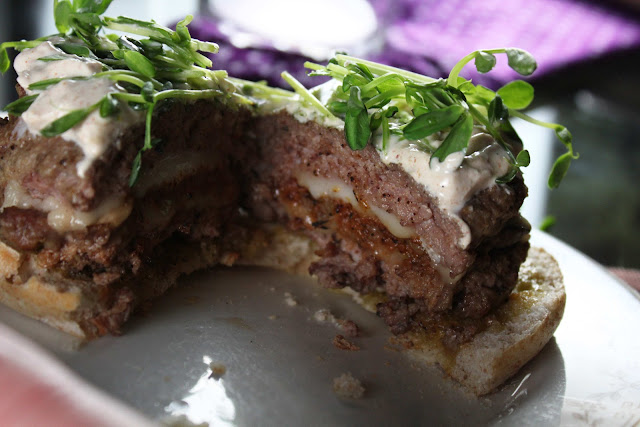 1-2 lb's ground beef (I prefer 80/20 to help keep the burger juicy)
Habanaro cheese, sliced thin
2 tsp seasoning salt
1 tsp black pepper
6 wheat buns
Pea shoots (or substitute lettuce or bean sprouts)
Chorizo and mushroom stuffing (recipe below)
Creamy cumin lime dressing (recipe below)
Mix the ground meat with the seasoning salt and pepper. Form into 12 patties- make them slightly flat so that once you put two together they won't be too thick to cook.

Layer cheese on six of the patties, then spoon the chorizo filling onto the cheese (split it between the 6 burgers). Place another layer of cheese on top the stuffing and top each burger with the second patty.

Carefully pinch the burger edges together around the stuffing; get a good seal so it doesn't split open while cooking. Sprinkle seasoning salt and black pepper on the the top of each, then set the stuffed burgers aside until ready to grill. Always grill meat at room temperature, never put cold meat on the grill.

Grill as normal to your preferred doneness. Let the burgers rest for at least 5 minutes before serving. Top with a large dollop of the cumin lime dressing and pea shoots on a simple bun brushed with olive oil. 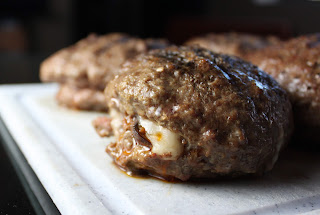 Makes 6 burgers. Chop the shallot and begin to saute in a drizzle of olive oil. Slice the mushroom into small pieces and add to the shallots. Allow that to cook until the mushrooms begin to soften. Add in the chorizo (casing removed if it has it) and cool about 5 more minutes or until the chorizo is done. Add salt and pepper to taste.

Remove the pan from heat, allow to cool before stuffing. If you stuff the burgers while this is hot- the meat will begin to cook on the inside. Tilt the pan by placing a kitchen towel under one side to let the chorizo grease drain.

Mix all the ingredients together, allow to sit for at least 1 hour prior to using. Best if made a day ahead of time.
at 1:05 AM