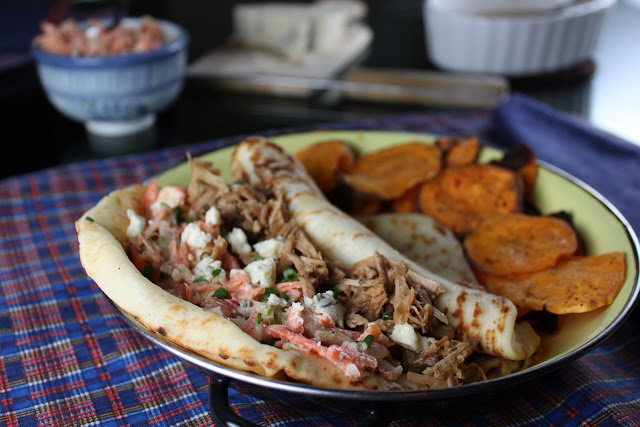 I don't claim to know North Carolina BBQ sauce, but I like it. This vinegar sauce is fashioned after that, but stops short of a tomato (ketchup) base. The tartness of the vinegar is soothed by the creaminess of the blue cheese. On it's own, the vinegar sauce packs a serious wallop, don't judge the sauce until it's paired with the meat, though. And if you've haven't married caraway with blue cheese before - you are in for a treat!

Remember, I'm not in any way saying this is a true North Carolina sauce so remember that before you write in your comments lambasting me on this. The combination of the vinegar, blue cheese and caraway seeds creates a super playful fun mixture on your palette. It's simple Fat and Happy sandwiches that rocks.

Tips and techniques:  Recipe makes 2 -4 sandwiches depending on the size of the naan. For the pork, see my posting for a classic crock pot pork. 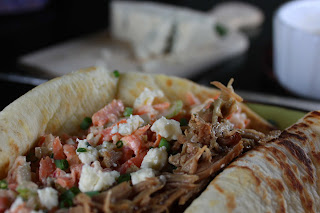 Putting it all together: Warm the naan bread by wrapping in tin foil and placing in a 300 degree oven. Place the pork in an oven-proof dish and cover with the vinegar sauce, place in the oven next to the bread for about 15 minutes.

Remove the warmed bread and pork from the oven. On the naan bread, layer on 1 cup of pork with a drizzle of the vinegar sauce and a few scoops of the carrot blue slaw. Fold the naan bread over, enjoy immediately. 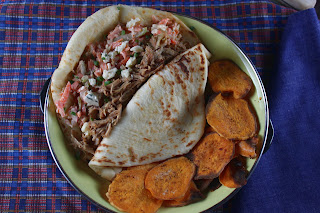 In a small sauce pan, heat all the ingredients over medium heat until the sugar is dissolved. Use immediately or store in the fridge for later use.  Pour over the shredded pork, allow the pork to sit in the the vinegar sauce to pick up the flavor. 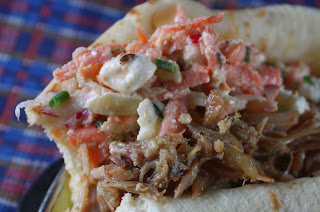 Using a box grater, shred the carrots, celery and radishes, place in a bowl.  Add the yogurt, caraway seeds and a good pinch of salt and pepper.  Stir to combine. Sprinkle the blue cheese over the top.
at 6:24 AM