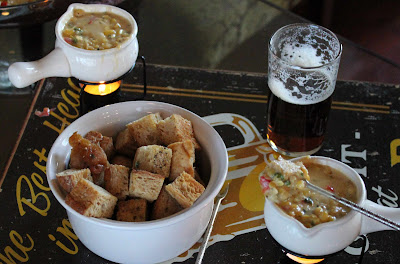 Do lentils and corn belong in a fondue?  Does that even make sense?  I didn't know when I first started making this dish but there was only one way to find out.

The lentils come into play because I needed a protein and since my fridge was bare of tasty meat parts, lentils are a superb option. The protein in lentils digest easier than their animal equivalent and since red lentils break down faster, they are an ideal thickener in soups and purees. 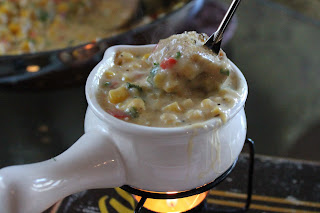 The fondue can be a dipping fondue or a bruschetta topping- it's your choice. I seasoned and toasted day old bread for dipping in the fondue; crunchy and tasty.  Spooning  the bread on fresh pita worked almost better.

So do lentils belong in a fondue?  Hell yes. Just pair with a malty brown ale you've got a hearty lunch (remember the lentils are filling!).  Of course, this would be a great appetizer as well. And remember Fat and Happy doesn't always make sense.

Tips and techniques:  For a creamier fondue rather than a chunky fondue- use your immersion blender or pour the mixture into a blender.  Blend until desired creaminess is reached. 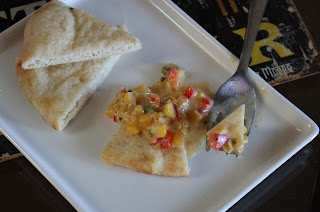 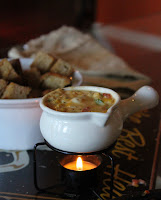 Add in the water and the wine. Simmer on medium until the red lentils are softened, 5-10 minutes. 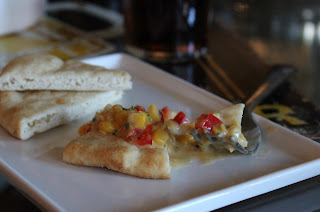 In the meantime, toast the bread cubes by ossing the cubed day old bread with olive oil, pepper and seasoning salt.  Toast under the broiler, tossing often to allow all sides to brown.

Drizzle in the cream into the mixture, simmer on low until  it thickens slightly, about 5 minutes. Remove from heat, sprinkle the fondue with the cheese and the parsley, allow the cheese to melt.  Squeeze the lemon over the top.  Serve warm. 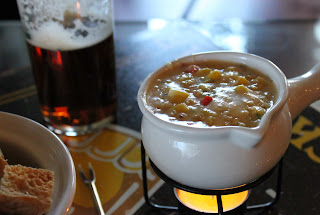