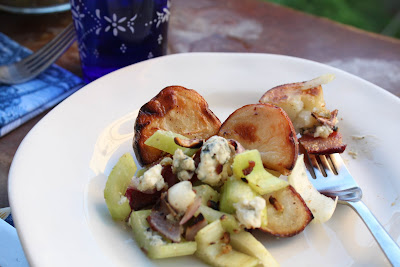 Hello, my name is Monique and I'm a wimp. I blame it on 15 years of living the good life in Denver. The weather was so warm, dry and balmy year round that I forgot what it meant to live in the Midwest. I'm not necessarily proud of this and I've received a lot of flack over it. I remember my first winter in Denver when I brushed the snow off the sidewalk with a broom (as opposed to shoveling it) while wearing flip flops (as opposed to sorels!)

My first Christmas Holiday in Denver was spent downhill skiing one day and golfing the next. I traveled back to the Midwest a few days later to bone chilling cold - 35 below, without the windchill. The idea of 'getting out of the house' meant going to the garage to bring the beer in so it didn't freeze. The Midwest winters mean you give up some things for many months at a time. 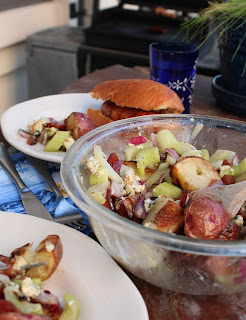 This past winter in Chicago was brutal. I longed to grill something, anything... even grilled snow would have sufficed.  Now the weather is reaching the 60's and we've been grilling for weeks.

Grilling offers a fabulous way to make super simple salads while keeping the heat out of the house. Warm grilled potatoes and onions begin to just melt the creamy blue cheese which mixes with the olive oil and creates its own sauce ... ah it's scrumptious! You won't be able to stop eating it.  Put on your flip flops, celebrate the return of warm weather and master your salad-grilling skills.  Now that's a reason to be fat and happy!

Tips and Techniques:  This salad is best when served warm.  Plan the rest of your grilling around the potatoes.  For a super tasty spread option, omit the potatoes and pulse the remaining ingredients together in a  food processor. 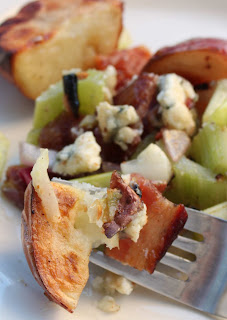 Scrub the potatoes, cut in half and toss in a bowl with 2 - 4Tbls olive oil and fresh ground pepper. Thread the potatoes on kabob skewers for easier handling on the grill. Add the garlic cloves on the skewers too. Place the skewers on the grill, cut side down, on the upper grate if you have one. Turning them once during cooking until just done, you want a firm cooked potato rather than a mushy one.

Cook the bacon on the grill by folding a little pan out of tinfoil, folding the edges up will keep the bacon grease from dripping into the grill and causing flare ups.  Cook the bacon until desired crispiness.
In the meantime, chop the celery (on the large side) and place back in the olive oil bowl. 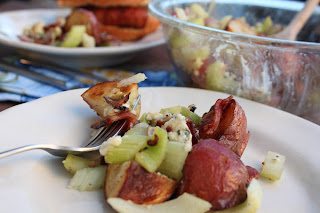 Add the potatoes to the bowl straight off the grill. Add  lots of fresh ground black pepper and a pinch of salt. Toss. Serve immediately.
at 8:40 PM