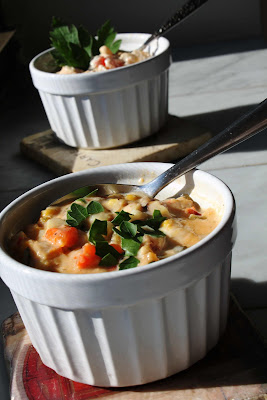 I'm going to tell you something that may shock you.  Ready?  I hate cilantro.  Not just dislike - but a deep hatred. Crazy coming from a 'foodie', right?  There are very few foods I dislike, and none more than cilantro.  It's pungent and overused in my opinion.

However,  I do understand that most people love it.  So when the the Gozamos Food Editor asked me to create my version of a Brazilian dish to help celebrate the magazines' Brazilian month, I broke one of my own rules and brought cilantro into the house.  Not that I think Cilantro completely defines Brazilian cooking, but it did come to mind as all the other fresh, vibrant ingredients danced in my head.

The base of this recipe is absolutely dependent on fresh, extremely flavorful ingredients; corn so sweet it doesn't need butter or salt when eaten alone, peppers that tease the back of the throat and fresh ginger that tickles your nose.  The outcome was quite lovely; if I made this again for myself however, I would substitute parsley for the cilantro.

Pick your poison- parsley or cilantro, I won't take offense to which one you choose because either way- you will be fat and happy with this Brazilian stew.  Oh, and if anyone wants to take the remaining bunch of cilantro off my hands- just give me a call!  It will be a while before I use it again! 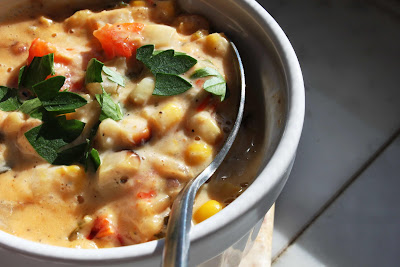 Tips and techniques:   You get a bigger flavor boost from grilling the corn and peppers first, the extra little smoky flavor mixes with the coconut milk and takes it over the top.

Grill the corn, red and poblano pepper.  Scrape the blackened skin off from the peppers and remove the seeds. 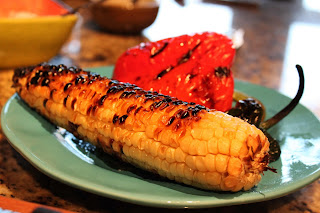 Stand the corn on end in a large shallow bowl or a cutting board.  Carefully slice the corn off the cob; squeeze any juice out of the cob you can.

Saute the onions in oil until the edges begin to caramelize.  Add the garlic, shallots and ginger, continue to saute.  Bruise the lemongrass (do this by cutting the stalk into a 2 or 3 sections and then bending each stalk several times to release the flavor) and add along with the garlic for about 4 minutes.

Add in the diced peppers, the corn, black beans (if using), and the coconut milk.  Let the stew simmer for 20 minutes.  Remove the lemongrass stalk, squeeze on lime over the stew and sprinkle in the cilantro. Serve with a lime quarter.
at 12:00 PM